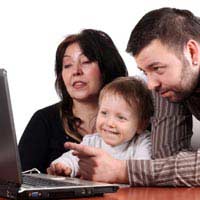 Identity theft is a growing crime both in this country and abroad, and often we contribute to its prevalence by unknowingly taking actions that make it easier for criminals to defraud us.

Children in particular need to be taught about keeping their identities safe, and what to do to keep their own personal details private. In fact, experts say that children are often prime targets for identity theft criminals, as their actions can go undetected for longer. Often, nobody realises that a child's identity has been stolen until they open their first bank account.

To make matters even more insidious, statistics show that the perpetrators of identity theft crimes against children are often people they know: a neighbour, friend or family member.

Identity theft against children is not that uncommon because it is a relatively easy fraud to perpetrate. All someone needs is an individual's name date of birth and address to open a bank account. While photo ID is needed – officially – often this is not asked for, as victims of identity theft will attest.

Sometimes fraudsters steal post to commit their crimes, such as when an individual received a pre-approved credit card in their name. Other times, they are able to gain access to important documents, such as passports, to allow them to carry off their scams.

Here are some recent cases of child identity theft:

Teaching your child about the need to safeguard their own personal information is vital when it comes to stopping identity theft in its tracks. Here are some steps you can take to help protect your child's identity:

It's important to teach children about how not to become victims of identity theft, especially as the crime may go unnoticed for years. Your child may only discover the fraud when he or she goes to open a bank account, take out a student loan or buy a first car.

If you are in doubt about your child's credit, or notice any suspicious activity whatsoever, ask to do a credit reference check at once. Don't leave it up to chance, as the longer you wait the worse things can get and the longer it will take to sort it out.

Criminals often choose to target children – even babies – when it come to identity theft as they will have plenty of time to do untold damage to the child's credit before anyone notices. Don't wait until your child's credit is in trouble – do something about it now.

What is Identity Theft Fraud Alert?