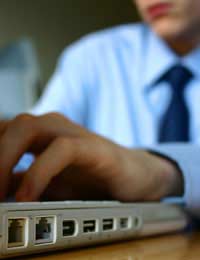 Even with the advent of anti-virus software and firewalls there is still the very really threat that someone may still try and hack into your computer and attempt to steal your details.

What is Hacking, and how can it be used for Identify Theft?

Hacking is the intrusive manner in which unauthorised individuals can gain access to your computer using the internet as a means of opening up a so-called 'back door'.

This activity while definitely illegal is one that many people indulge in for no other reason than to cause damage or mischief or use it.

However in recent times the threat of hacking has taken on an entirely new meaning and one that can mean the theft of your identity as well as your banking details.

Many hackers will find a way into your computer using software you already have installed. This may be software that includes so-called Spyware - a small program that can pass information out over the internet without detection, known as a Trojan. These have become a major computer problem

Indeed, with Trojans, many people who have been the victim of computer hackers have only discovered the problem after the event. It is difficult to identify that your computer is being hacked either whilst you are using it or whilst it is switched on, so you could be a victim of identity theft even as you read this.

How Hacking a Computer Works

Hackers - as we have already mentioned - uses the internet as a means of gaining access to your computer from another location. Indeed it may be that the person or persons hacking into your computer are not even on the same continent.

Now that Internet Service Providers (ISPs) are offering always on internet - which means that the internet is connected if your computer is switched on or not - there is more chance that your computer could be subject to hacking while you are away from it.

It is worth noting at this point that your computer is not at risk of hacking if it is switched off even though the internet connection is always active.

A hacker will introduce a small program or lines of code into an email or program that you download which will then open up a 'port' or channel through which they can gain access to your machine. Spyware could be on an infected web page or in an image, and any or all of it used be used for some form of identity theft. They can do this using a laptop computer and a wireless connection and can even use mobile telephones as a means of providing an internet connection.

It is important that you take ever precaution when it comes to safeguarding your computer and the personal information contained therein. Hackers strike when you least expect it and vulnerable computer systems fall foul of hackers in a much shorter time than those that have some security attached to them.

A firewall will be active as standard on most new routers which are provided by Internet Service Providers (ISPs) when you take on their service but you should also have a software-based firewall that enables you to specify which programs you wish to have access to the internet. This can stop a lot of hacking attacks, but not 100% of them.

In addition anti-virus software is an essential part of the arsenal against hackers and viruses as to is Spyware software which will uncover and alert you to the existence of small programs which may send out information about your computer.

When you are subscribing with an Internet Service Provider it is a good idea to ask for a roaming IP address. IP stands for Internet Protocol and this IP address which normally begins with the numbers 192 is used as a means of connecting you to the internet through your ISPs server. A static IP address - which you must pay for - is a number beginning with 192 that is always applicable to your computer whether or not you disconnect from the internet. Whereas a roaming IP address is one that is allocated as a different number every time you log onto the internet, this is a good way of reducing the risk of hacking and identity theft.

If you are in any doubt as to the security of your computer whilst online then you should consult an IT specialist who will be able to provide you with help and advice in order to block the hacker's best efforts at gaining destructive access to your computer.