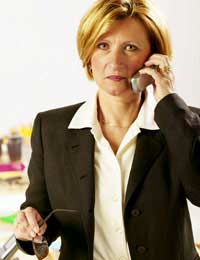 At 3:30 pm on a spring afternoon last year, the phone rang in Claudia Gorman’s west London home. She should have been suspicious, she says, because normally she is at work then and nobody would think of ringing her.

That day, however, Claudia had the day off, so she quickly answered the phone. “It was from a firm we had considered getting a mortgage with,” she says, “and so I first I thought they were calling about the mortgage.”

But the phone call was not about the mortgage – it was about a home insurance policy that the same firm wanted to interest Claudia in. “It sounded a bit odd as I had previously spoke to someone based in the UK, and this sounded like it came from a call centre abroad,” Claudia says.

“The man sounded like he was about 18 years old and had a strong accent, and the connection was so bad I could hardly hear him.”

Claudia, who works in a research lab, at first answered some of the questions put toward her. “He asked me to confirm my name and address, which I did, and then asked for my date of birth.

“I thought that was a bit odd and asked why he needed it. Then he asked for my banking details.

“At that point, alarm bells started going off in my head, and I put the phone down.”

Not one to take things lying down, Claudia, who’s 47, called the mortgage lender directly to see if the call had been legitimate.

“They had no record of anyone calling me that day,” she says. “They said it could have been an identity theft scam, and to be wary about giving away any of my details over the phone.”

Phone scams are becoming more and more common – and more and more sophisticated. Often, the caller pretends to be from a legitimate company, and tells you there is a problem with your account. He or she then tries to extract pertinent information from you, such as your email address and banking details.

Another scam involves a caller masquerading as a tax official, and telling you that you are due a refund. They then try to get your banking details as well as National Insurance number and council tax reference numbers.

Identity theft is one reason these scams abound. Once they have your info, the fraudsters can take out loans in your name, get credit cards and write bogus cheques.

Other phone scams are simpler. One involves a hang-up call. If you dial 1471 and ring the number back, you’ll be charged a whopping £50 per minute. Amazingly, the police say there is nothing illegal about this scam, so be careful!

Claudia has learned something from her scam attempt, and is very careful what she tells callers now. Last week she bought a coffee machine at John Lewis, but as it was only available at another branch she had to give her credit card details to the other branch over the phone.

“I paid for it, was given a reference number, and went home. Then about three hours later the phone rang. It was from someone claiming to be from John Lewis, asking for my payment details.

“As I had just given the shop my payment details, I hung up immediately and phoned John Lewis back myself - using the telephone number on their website.

“It turned out to be a legitimate call, but I told them I would never just give my credit card number to someone over the phone who simply claims to be from John Lewis. I am really on my guard now!"